I’ve been an HR Professional for over 10 years. I have progressed through my career from HR Assistant to HR Generalist, working with multiple nonprofit organizations (and a few for-profits) in the DC Metro Area. Every few years I would consider pursuing certification (PHR), but for whatever reasons, I never got around to doing it. When SHRM came out with its certifications (SHRM-CP and SHRM-SCP) I took another look at becoming certified, but now there was a choice to make – PHR or SHRM-CP. After doing a little research, I decided to go with the SHRM-CP certification because it is competency based.

So I registered for the exam and purchased the SHRM Learning System (which is NOT cheap, folks!)  I’m going to be honest, I didn’t really study for the exam. Not with the learning system anyway. But as I said in the beginning, I’ve been doing this for a long while. And after all, it’s competency based and I’m nothing if not competent.

February 12, 2016 – I head down to the testing center which had to be a full 115 degrees in the waiting area. I felt like I was doing bikram yoga with clothes on. Luckily, the actual testing area was more comfortable. I went through the ID check and body scan and proceeded to attempt to prove my HR competence. Three hours later I received an early Valentine’s Day present: 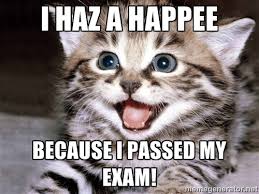 Of course, I am not allowed to use the SHRM-CP designation until I receive the OFFICIAL results in the mail, but when I receive them I will be using it all over the place. I’m looking forward to this next chapter in my career as a CERTIFIED HR PROFESSIONAL. 🙂